How to Duel in Harry Potter: Hogwarts Mystery 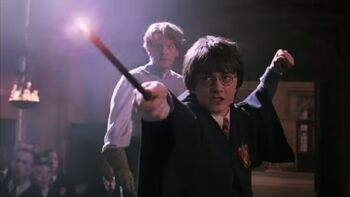 Dueling is a principle mechanic in the world of Harry Potter, and represents the primary way of battling in Harry Potter: Hogwarts Mystery.

There are three main approaches to dueling, which can roughly be called a "stance" - the combination of these stances will determine who lands a hit, and who gets hit. The mechanic functions as a sort of rock/paper/scissor game, with each of the three stances - Aggressive, Defensive, and Sneaky - having their own strengths and weaknesses. Aggressive defeats Sneaky, Sneaky defeats Defensive, and Defensive defeats Aggressive - when two people use the same stance, the attack is a draw.

Dueling has a lot to do with maintaining your stamnia - falling too low will make it impossible to duel, and will result in some pretty significant loss stats. Your best bet is to balance the need for doing damage with the need for survival, and ensure that your stamina never falls below 50%.

Each stance has its own set of possible charms and spells. Utilizing the proper spell will affect the flow of the duel significantly, and can result in some pretty lopsided victories if used correctly.